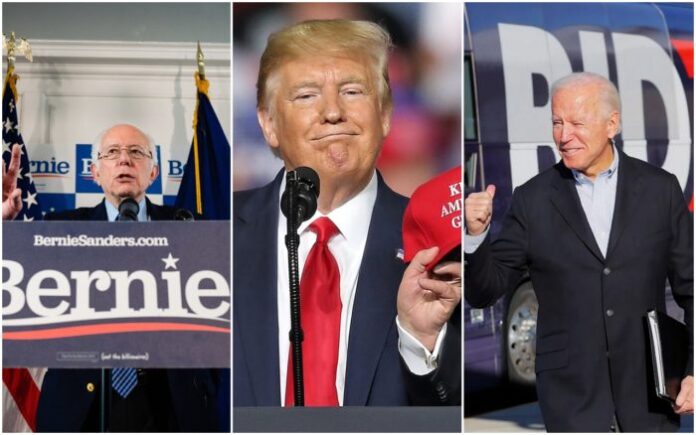 The ongoing race for the highest seat in the White House is in its initial phases, and the voting season is gradually inching closer to the day of the general election on November 3. From platforms to political backgrounds, the candidates are being nitpicked in almost every aspect of their lives. That’s why candidates need their branding to stand out and both impress and connect to the voters.

The remaining presidential candidates are set to face a myriad of issues, and having a strong campaign branding can relay how serious they are about addressing America’s problems. According to DesignContest, a well-thought-out branding strategy can persuade voters to support a candidate and turn the tide in their favor.

In this article, we will dissect three primary contender’s campaign logo and branding, and find out what it says about them as a potential future leader of the United States.

The current US President, Donald Trump, is seeking a second term on the seat he has taken since 2016. Comparing the old campaign branding to the new one, the first thing that strikes people first is the subtle yet telling slogan change. From “Make America Great Again” in 2016, it now reads as “Keep America Great,” which tells about his confidence and promise that America has reached a significant high during his stint as president.

His logo design is predominantly colored blue with white lettering and red accents. His other branding materials also utilize these colors, such as shirts, hats, and straws. These three colors are representative of the US itself, which are also what other candidates typically use for their campaigns as well. Trump’s team chose energetic hues that command attention and memorability.

The incumbent president’s logo uses a sans serif typeface, which is blocky and bold. It’s simple and on the ordinary side, but it works primarily on the hats, which is probably the most reliable campaign material in the election by far.

About his brand voice, Trump’s campaign seems to veer away from his tone, which is assertive and straightforward. His brand voice is a little muted and tempered, which can contradictory to his real persona, but sounds compelling to his followers.

What President Trump is doing is feeding his loyalists and trying to convince other people to support him. Not only does it look like he knows he has earned the trust of many Americans, but he also believes that he can coax other voters to join his movement.

As the oldest in the presidential race, Bernie Sanders has opted for a conventional branding and logo for his 2022 campaign. It’s his second attempt at a nomination and the presidency, which is remarkable in that he still wants to take a crucial and challenging role despite bowing out the first time.

Sanders has proudly trumpeted himself as socialist despite criticism over this identity, with fellow candidate Trump saying socialism destroys nations. However, Sanders is undisturbed and is applying it to his branding. For one, he uses the American colors red, white, and blue but has chosen a lighter and friendlier shade that is easy on the eyes.

His logo uses wavy lines that signify movement and security, while also depicting a consistent theme of being a man for the people. The star on the logo is also a subtle touch of imagery that completes the all-American theme and also denotes success, achievement, and light.

Sanders emphasizes on his campaign that he wants to serve all Americans and not just the ‘one percent’, and his branding effectively carry out this message as well. His campaign materials typically use just his first name, Bernie, which is part of the strategy to appeal to moderates. His brand voice, however, remains traditional, which is predictable for his age.

What the Sanders campaign excels in is in the outreaching activities they have done this season. He has garnered admiration from the working class and aptly reaches out to them via social media. By far, he has the most followers out of other Democratic candidates, with celebrities adding to the modern vibe of his campaign.

He applies transparency to his events such as behind-the-scene takes, which exemplifies what his slogan is about, “Not Me. Us.”.

Joe Biden is a Democratic presidential candidate up against Bernie Sanders for the coveted nomination. His slogan, “No Malarkey,” and “Our best days still lie ahead” are a bit on the old school side, which isn’t surprising as it’s also how the rest of his campaign branding is touted.

While the blue and red colors on his logo are also traditional, it uses the whitespace technique, which is considered as one of the rising trends for this year’s design industry. The three horizontal red lines forming the letter E on Biden’s name is a smart and attractive element that helps the logo pop out. Using sans serif is also one of the more modern takes in this logo. Much like Trump, Joe’s colors are bright and imposing to commit it to memory,

The logo plays on the safe side, but it also helps the former Vice President be known as a down-to-earth, next-door guy that people can turn to when they have problems. He appeals to the people as someone who is like the others and is a leader of the masses.

Biden’s voice is primarily inspirational and optimistic, which is reminiscent of former President Obama’s campaign and run. He does not shy away from issues, is straightforward in his words and actions. These qualities are highlighted in his branding.

While it’s not easy to rate the presidentiables just based on their logos and campaign materials, analyzing their branding can give insight on how they plan to be the best bet for the 2022 elections. However, their brand is not everything, and your decisions should not come solely from how they design their merchandise or logos. Researching about their platforms and knowing their strengths should also be a top priority. Most importantly, going out to vote is the best thing every American can do for the nation.

Voting During Crisis: Braving The Chaos For A Better Tomorrow