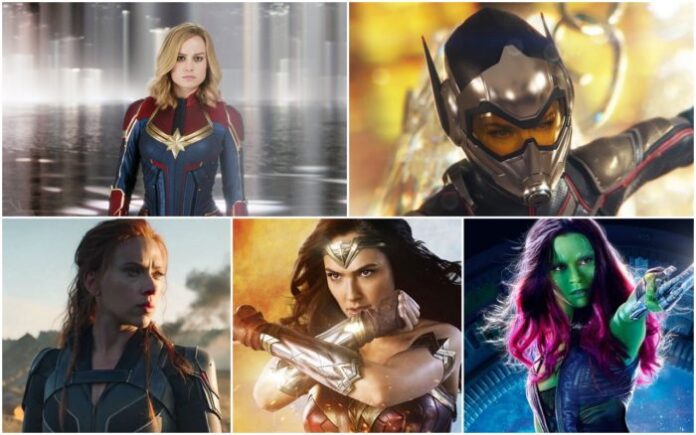 Ever since Marvel and DC Films started churning out superhero movies, they have rapidly grown in popularity, gaining a massive and loyal fanbase all around the world. And while we will all probably agree that the heroes in those films looked extremely cool, strong, and impressive, one thing that didn’t go unnoticed by many was the lack of proper female representation. Most of the female characters where more damsels in distress than strong, powerful individuals, but luckily, things have changed in recent years. Both companies have introduced amazing female superheroes we have all grown to know and love. However, besides having more women in the superhero universe, there is a much bigger and more important role and message these characters send out to the world, especially to girls and young adults.

Objectively speaking, superheroes are supposed to be awesome, inspiring, strong, and empowering individuals that use their powers and skills to protect the world and change it for the better. Just because a hero is a woman doesn’t mean she has to fit into a certain mold, in fact, gender should never play a role.

You might wonder how or why is this so significant? To put it simply, introducing amazing female characters that can hold their ground, know how to take the lead, and that do not need a man to save them can influence the way girls view themselves and help them realize and envision all the great things they can do. Even though superpowers are extremely cool, the true importance of superheroines lies in the fact that they can completely change the way women perceive themselves in our society.

And although there is still a long way to go, let’s take a look at some of the greatest female heroes we have today.

Although Captain Marvel also known by her human name Carol Danvers has been a part of the Marvel Universe for quite some time, she became more widely known after the release of the blockbuster of the same name in 2019.

Initially a human and pilot for the U.S. Air Force, she ends up in space where an accident and massive explosion exposes her to photon energy. Somehow managing to absorb it, the energy gives her several extraterrestrial abilities such as flying, superhuman strength, and the ability to project photon energy out of her hands.

Not only is she the first female lead in the MCU but also one of the strongest heroes as well.

The first heroine to appear in the MCU, Black Widow also known as Natalia Romanoff, a known former Russian spy, now an agent of S.H.I.E.L.D. Natalia possesses numerous skills and abilities, making her strong and deadly despite being just a human.

She is trained in a variety of martial arts, is an expert tactician and marksman, has enhanced agility, and is extremely skilled in hand-to-hand combat. Although she does not have any superpowers, she ages slower than the average person and has an enhanced immune system.

A standalone movie is scheduled to premiere in May with great anticipation from Marvel fans. If you would like to learn more about the upcoming film, watch the trailer, or check out some great movie recommendations, the Vore provides you with all three.

The first-ever heroine lead, Wonder Woman proved that inclusiveness can go a long way. Not only was the movie a blockbuster hit, but it also showcased just how great, amazing, and strong women can be.

Princess Diana of the Amazons, later known as Diana Prince, is the daughter of Zeus and the Amazonian queen Hippolyta. She possesses numerous abilities some of which include astral projection, immunity to fire, extraordinary agility, superhuman stamina, empathy, resistance to magic, enhanced senses, super strength, speed, healing, and much more.

Although it has never been confirmed that she is immortal and never-aging, in both the movies and comics, it is apparent that she does not get older as time passes. Her signature weapon is the famous Lasso of Truth that compels people to speak the absolute truth every time it is wrapped around them.

Gamora’s story is much more complicated and dark, not only because she was adopted by the ultimate villain Thanos that planned to use her as a weapon, but also because, thanks to her adoptive father, she is the last of her race.

After finding out what Thanos did to her and her people, Gamora decides to take revenge by joining the Guardians of the Galaxy. Her special abilities include rapid healing, enhanced agility, and superhuman strength. Moreover, she is an extremely skilled combatant, having the ability to defeat almost any opponent in the galaxy.

Although Hope van Dyne made an appearance in the first Ant-man movie, her alias the Wasp was not featured until the second installation – ‘Ant-man and the Wasp’. The daughter of Hank Pym, the creator of the Pym particle and the original Ant-man and Janet van Dyne, the original Wasp, Hope took on the role after the death of her mother.

Thanks to the Pym particle and a specially designed suit, Wasp can fly, manipulate her size, has super speed, can send bio-electric energy blasts, and is able to control insects telepathically. She also has enhanced fighting abilities, although it is unsure if this is due to the suit she wears or if these are abilities she might possess outside it.

Although we have only named 5 of the best heroines, there are still several others that are equally outstanding. These include the X-men’s Phoenix and Storm, Black Panther’s Shuri and Okoye, Thor’s Valkyrie, Scarlet Witch, and many more.

Every woman should be recognized as a strong individual that can make anything she wants to happen. This is exactly why, in today’s time, strong and independent female superheroes are necessary. It does not mean your favorite has to be a woman, but it is crucial to at least acknowledge the influence and importance they have.

Luckily, these characters are slowly breaking gender stereotypes and it will be amazing to see even more individuals in both the Marvel and DC cinematic universes that simply command respect and admiration.