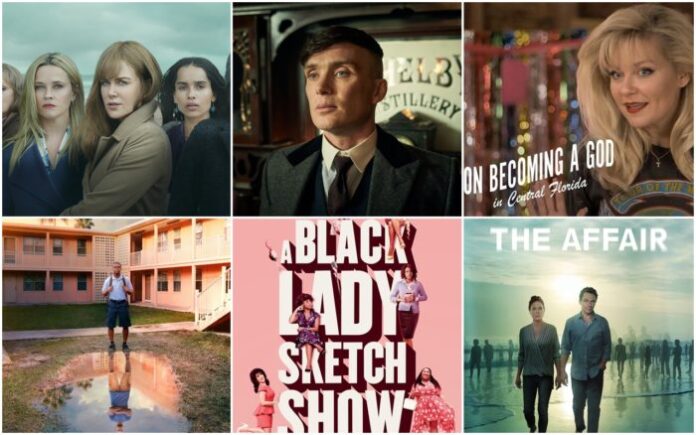 One of the primary functions of dating site like TenderMeets.com is to encourage singles to get to know each other based on compatibility. So newcomers will be invited to provide information about their favorite activities and hobbies, allowing a good chance of them being matched with someone suitable. Once you begin browsing through the online personals (profiles of other site users,) perhaps you like to home in on people sharing your taste in music, or sports, or any other recreational pursuit you could care to mention. One of the commonest is TV shows. When you do hit it off with someone and suggest a cozy night in participating in such a venture, the only remaining question is which particular show to watch together? Here are six of the best.

Released by HBO earlier this month, A Black Lady Sketch Show reinvents the much-reinvented sketch show format, bringing it into the modern age with a cast of confident and sassy women, relaying a dizzying variety of one-liners and well-observed comedy routines written by improvisational comedian Robin Thede. Afro-American comics are joined by a stellar cast of celebrity guests, including the transgender actress Laverne Cox, and versatile performer Angela Bassett (renowned for many roles, including a voodoo high-priestess in American Horror Story.)

With the cast-iron production credentials of Oprah Winfrey and Michael B Jordan (The Wire), this engrossing series is essentially a comic of age story about a gifted teenager (Akili McDowell.) Although he is regarded as being a brilliant student by his teachers, he faces pressure from often-dysfunctional home life, exacerbated by the criminality which is rife in the housing project he is growing up in. Perhaps a familiar tale, this is given a poignant twist by the rich array of characters surrounding the main protagonist, and the crucial role that his imagination plays in his development.

3. On Becoming A God in Central Florida

While burdened by a rather unwieldy title (it hardly rolls off the tongue in the same way as, say, Friends or Seinfeld,) this anarchic comedy makes the most of highly-dextrous actress Kirsten Dunst. Playing Krystal Stubbs, a single-mom and Orlando water park employee, clawing her way up the pyramid scheme which brought ruin to her family, Dunst steals the show by getting what she wants be anticipating what her rivals are aspiring to. Like many of the best date night shows, this compelling drama melds comedy and darker themes to expert effect.

Recently returning for its fifth season, this period drama is a stylish must-see for any date night. Set in England’s second-largest city, Birmingham, between the First and Second World Wars, Peaky Blinders focuses on the trials and tribulations of the Shelbys, embroiled in criminal activities yet united by strong emotional ties and the loyalty of kin. Their chief enemies appear to be even more nefarious than they are, meaning you root for family head Tommy (a mesmeric performance by Irishman Cillian Murphy) and matriarch Polly (an equally enigmatic Helen McRory) despite their propensity for violence.

Reece Witherspoon and Nicole Kidman were joined by Meryl Streep for the latest in this superb study of the dark intrigue lurking beneath the respectable facade of Monterey, California. The dialogue is always captivating, and frequent jump cuts and flashbacks enhance the storytelling.

Entering its final season, you might think a story centered on the often-devastating fallout of infidelity is hardly ideal for date night. But this multi-layered psychological drama, starring English actors Dominic West and Ruth Wilson, will draw you in and keep you riveted.