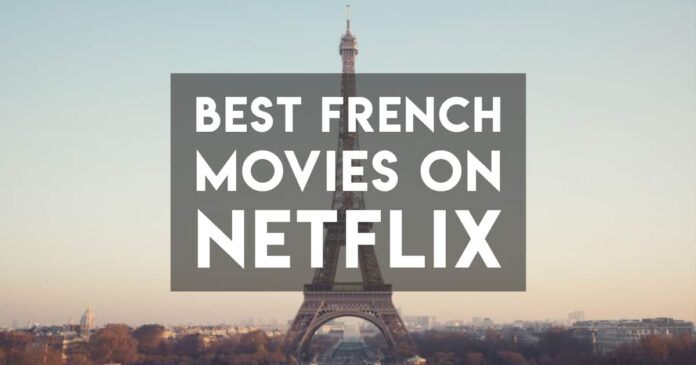 It is a well – known fact that everyone is watching Netflix today, and indeed there is a reason for that. Besides numerous TV shows and new movies that are coming up every month, on Netflix, there is an ”International Movies” option, where you have access to videos and series from all over the world. So is the case with French movies, as that is our topic for today.

French cinema is one of the oldest and most popular in the world, and regardless of the genre, today on Netflix, you can find a wide variety of movies in any language, and such is the case with French film. Flixboss is the unofficial guide for Netflix that makes it easier for you to search for your favorite movies and shows. The charm of a French cinema never dies, and we can witness that, as we take a look at ten masterpieces that you can watch on Netflix.

Coming from the award – winner director Benjamin Weill, this movie speaks about friendship, new challenges, and teenage life of four boys and their adventures. Set trough the lens of American popular culture, and West Coast rap scene, the movie tells us a story about French teens under the nicknames Copkiller, King Kong, Fle O and Delete, and their journey from dreaming about imaginary life of American rappers to real-life adventure, following the retrievement of a stolen item. Following the quest, boys will leave their small French town, and find themselves in unusual situations while they are trying to untangle the mess they created. During the journey, the boys will experience a colorful set of emotions from fear, joy, and love, and Benjamin Weill made an effort to present it unusually, and we think he succeeded in achieving that.

A classic and charming piece from Julie Delpy reminds us of the feeling we have whenever we watch her movies – falling in love. In her new film, you will tend to forget about the everyday struggles and enjoy the sweet and soft taste of Lolo. Admittedly, we can’t forget that Julie has this classic French charm that she transmits to her movies, and Lolo is one of them. Romance, comedy, and bitterness of everyday life, combined with specific characters that are, by fate, joint together, are fundamental elements of Lolo. Following the young Eloi (Vincent Lacoste) in delivering an innocent image of himself to his mother, Violette (Julie Delpy), who always calls him Lolo. Violette is often busy with her work in the fashion industry. However, after she meets an IT genius Jean – Rene (Dany Boon), things start to change. While Violette tries to balance work and new love – life, she doesn’t notice how shocking and surprising that relationship is to her best friend Ariane (Karin Viard) and Eloi.

Especially after Eloi realizes that Jean – Rene is here to stay, things quickly start to develop tragically. However, it is one dramatic and comedic plot, with lots of twists and remarkable appearance of Vincent Lacoste, who brought Eloi to life and did it correctly.

What is considered as the Delpy’s main achievement is that Lolo remained soft and bright, despite the strong tragic and dark element, and that is why this movie is on the must-watch list.

From the creator of television serial Lil’ Quinquin, there is a refreshment in the shape of a mysterious and frictionless piece called Slack Bay. This time, Bruno Dumont tries to impress us with the unique film that doesn’t know what logic and continuity are. The film is made for everyone. However, only a few can understand it completely. The primary key to understanding the movie is to send the logic on vacation and begin to wander instead. However, there is a good reason why this movie is that well ranked, and it is mainly because the director tries to normalize the abnormal, and he succeeds in achieving that. It is something we don’t see quite often; therefore, when a masterpiece like this is created, we should be thankful to its creator forever. The life of a wealthy couple Andre (Fabrice Luchini) and Isabelle (Valeria Bruni Tedeschi), whose holiday in northern France gets interrupted with the Brufot clan, tells us a story about wonders of life and weird ways of living it.

7. He Even Has Your Eyes

If there is anyone who hasn’t heard of Lucien Jean – Baptiste, keep your eyes wide open, because here comes another masterpiece of his. Not everyone can produce and deliver such high – quality content about tricky such issues like racism and puts it in the context of a comedy. However, there is no one like Jean – Baptiste too, and this movie is truly a divine piece of art.

He Even Has Your Eyes tells us a story of a young black couple who adopt a blue-eyed white baby boy. Even though there are mixed families, and trans-racial adoptions worldwide, the element of surprise when a black couple is seen with a white baby, presents the absurdity of society in which we live today. The main character, is the mother, Salimata (Aissa Maiga) who, alongside her husband Paul (Jean – Baptiste) tries to cope with the challenges of adopting a white baby while facing a disappointment from her family. The film showed us a wide spectrum of racial elements, established in many forms. The glorious achievement here is that the director managed to create an entertaining film, regardless of the topic’s serious background. Besides, the movie has a clear and entertaining message and universal humor, which makes it easy to watch and follow.

The marvelous story about the past and its mysterious ways to shape us and follow us to the present day. The history is always alive, not only when we remember, and that is what Arnaud Desplechin wanted to show us. The film talks about the journey from adolescence to adulthood. If you have followed Desplechin’s early work, you will know that My Golden Days are a prequel to the movie My Sex Life…or How I Got Into an Argument, a coming of age drama, that is released twenty years ago. My Golden Days are more about the small links between past and present, Paul’s experiences as a student, as a lover, and as a man who is feeling uncomfortable with the current role in life. The essential Desplechin’s skill is to capture the sensation and simultaneously present chaos within a perfect sense of order.

5. April and the Extraordinary World

The fantastic duo, Christian Desmares, and Franck Ekinci joined their extraordinary talents and created a piece of art for us to watch. A real-life story, in which history is re – questioned and set in the context of creating a European identity. While watching a movie, you will find yourself wondering and questioning everything, since the creation of the Earth and its past. However, the directors made everything look beautiful with quality animation and visual effects that create magic. The plot of the movie is deeply abstract, and it contains an endless set of emotions that will guide you and touch every piece of your soul. If you can keep up, be able to connect links between scenes, we ensure you will be delighted with the movie.

4. Blue is the Warmest Color

Red might be the color of love, but blue is the warmest color. In the beautiful awarded masterpiece, Abdellatif Kechiche, this time presents the hidden realities of a romantic and tragic series of events. The piece Blue is the Warmest Color (La Vie D’Adele Chapters 1, et 2) follows the life of Adele, her growing up and search for true colors, which she finds in blue hair of her lover and girlfriend Emma (Lea Seydoux). The touching story justifies the length of the movie and the reason why it was initially divided into two chapters. It is impossible to remain untouched after witnessing the tragic love and departure of this lesbian couple after watching them grow together until, eventually, they grow apart from each other. It hurts and enlighten us, as love usually does, because love is in the essential part of this story, and it erases all boundaries when it comes to gender roles and a perfect representation of heterosexual love. After watching this movie, you will be warmed by love, drawn in tears, and you will wish that someone looks at you the way Emma looked Adele with her warm blue eyes.

Rarely someone can play that good with the plot and shows the movie from different perspectives as Bertrand Bonello.

Nocturama relies on the audience’s understanding, and that’s what it gets. Bonello’s consistency in creating a movie without specific explanations, tells us a story as it is, and we need to unfold it to realize it. The story follows Parisian teens and captures their beauty. At the same time, they participate in a terrorist act and later create a certain development that will lead to the final explanation of the unfortunate events. The crucial point in the movie is that such acts are never clearly explained, as Bonello doesn’t allow his protagonists to have a chance to explain themselves. Furthermore, he transfers that obligation to us, the audience, who will observe the faces of each innocent young person, what they’ve become, and what stands behind each decision taken. The Parisian youth, described in a way that wasn’t seen so far, grieving in its glory and confirmation of the status, is an essential aspect of the movie. Bonello carefully plays with the ideologies, class, and acts of terrorism, and he completely relies on the understanding of his audience.

Olivier Assayas, once again, showed how brilliant he is in his peace Clouds of Sils Maria. The story follows two women, an aging French actress (Juliette Binoche) and her young American assistant (Kristen Stewart). In the story, the conflict of generations, and confronting in the various fields in life, as their realities are completely different. The art of everyday life, in which old actress and young assistant find their ways to explain life, by bringing the best from their generation gaps. The essential message of the movie is that life will always be something more: to see, to act, or to do, to live. The ultimate desire for life that simultaneously brings us joy and sorrow.

Another masterpiece, from the same director, Olivier Assayas, the movie made its way to the first place of this list. Personal Shopper is a thrilling and exciting story about Maureen (Kristen Stewart), who believes that she can communicate with her dead brother. However, soon she will discover that there are multiple possible explanations for her madness. As it is seen before, Assayas loves to dive deep into the philosophy of his movies, and trying to explain his plots, would be quite a suicidal attempt. But, let’s say that he manages to show Maureen’s life being observed from different angles, preferably the different ones. As it is expected, the movie shifts from ghosts, to thriller with the sexual aspects of it, thus moving to the internal questions about grieving and disappointment. Assayas showed once again, successfully, that shifting in a single movie is possible only if you do it in the right way.