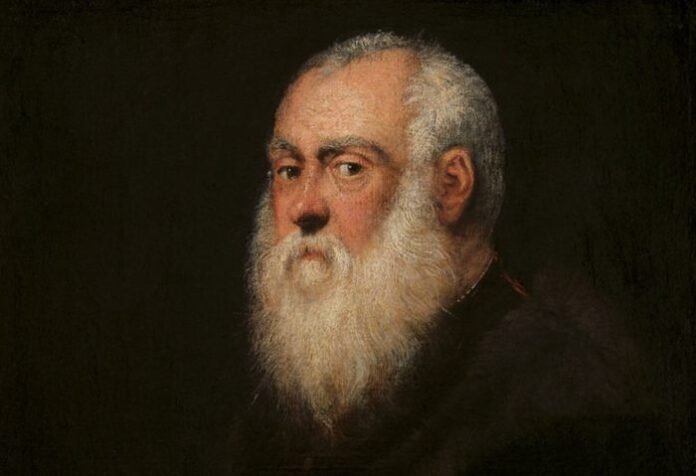 Jacopo Robusti Tintoretto, born Jacopo Comin, (1518 – 1594) was a famous Italian painter and one of the most prominent artists of the Venetian school. He was one of the few artists of this school who was actually born and raised in Venice. Because of his techniques and also the speed in which he created his work, he gained a nickname Il Furioso (“The Furious”) and was both admired and condemned by his colleagues.

Little is known about his childhood and life, even the year of his birth is not known with certainty (it’s either 1518 or 1519). Because of his father’s job, the artist was exposed to colors, pigments, and other mediums used in art, from an early age. He even got a nickname by which he is known today – Tintoretto which means “the little dryer” because of his father’s occupation.

When it comes to his training, there are no records of it, but it is believed that he started his apprenticeship in the studio of a famous painter, Titian. However, this collaboration didn’t last for a long time, and there have been some speculations about why this was the case. According to some sources, Titian was jealous of the young artist’s talent, while others believe that their personalities were too different and they just couldn’t work together.

It is believed that this is the only formal education that Tintoretto got, so he continued developing and mastering his skills, firstly by decorating furniture with small paintings and later creating his own work.

Wall paintings “Belshazzar’s Feast” and “Calvary Fight” are believed to be some of his earliest work. Another one, “The Presentation of Jesus in the Temple” can still be seen in a church in Venice called Santa Maria dei Carmini. Here are some of his other famous pieces, and you can learn more about these and other ones online.

The Miracle of The Slave, completed in 1548, is a piece originally ordered by the Scuola Grande di San Marco. It portrays a moment in which, a man (the nude figure) violated his master’s order and prayed to the relics of Saint Mark, patron saint of Venice, is waiting for his punishment. However, every time the executioner attempted to harm him, his tools were broken. At the moment, Saint Mark appears to protect the slave from a painful death.

Here, the masculine figures staged in different positions show us the influence of Michelangelo on Tintoretto’s work, but also we can see other features of the Venetian School such as vivid colors. Without a doubt, this painting had an enormous impact on his career and attracted attention to his work. Today, this painting is kept in the Galleria dell’Accademia, in Venice.

The Crucifixion is oil, life-size painting, from 1565. Here, the artist follows the traditional iconography presenting the pain of St. John the Evangelist, the three Marys, and Joseph Arimathea and Nicodemus, the men who will remove Christ’s body from the cross. Just by looking at the painting, it is as if the viewer can feel the horrors of this scene. This piece was one of the first of around 50 paintings created for the Scoula Grande di San Rocco over the next two decades.

The Origin of the Milky Way (1575) is one of the four Tintoretto’s paintings of the myth of Heracles. According to the story, the god Zeus brought his son to his wife Hera to breastfeed the infant while sleeping. However, when she woke up, she found an unknown infant by her side and pushed him away, spraying the milk across the heavens which then formed the Milky Way.

The importance of this series of pieces lies in the fact that it was commissioned by the Holy Roman Emperor and the King of Hungary, Rudolf II showing the growing popularity of the artist beyond the borders of Italy. Nowadays, this work is housed in the National Gallery in London.

Mosses Striking the Rock (1577) is another painting that portrays the story from the Old Testament. Tintoretto displays the exact moment of the water flowing from the rock after the Mosses had struck it for the second time.

The contrast between light and dark colors represents the difference between heaven and earthly figures below. The power of this painting is in Tintoretto’s harsh brush movements and also the presentation of strong masculine figures. Once again, this piece is a part of a series of three ceiling paintings which present Old Testament stories, created for the Scuola Grande di Roco

Il Paradiso is one of the largest paintings in the world and it is also one of Tintoretto’s final works. A fire in 1577 destroyed the 14th-century work by Guariento illustrating the Coronation of the Virgin. After being chosen to replace Veronese, Tintoretto submitted two sketches that were completely different than the final work.

In this piece, Chris and Mary are presented inside a golden circle at the top. They look down, towards the clouds of angels, saints, and other individuals who had resurrected and are now looking up towards heaven.

Taking into consideration the size of this work and also the fact that it was painted in the Scuola della Misericordia’s main hall, it comes as no surprise that the artist wasn’t able to complete the work on his own. Still, he had created the preparatory version of the piece which was then completed by his son, Domenico.

Last Supper is an oil painting completed in 1594. Unlike the other famous representations of this scene, Tintoretto decided to make the secondary characters the center of the painting. Also, the table where the apostles sit is placed at a sharp angle. Due to this, this work, created for the Church of San Giorgio Maggiore, is believed to be the most unusual representation of this scene.

Instead of depicting Christ in the center, surrounded by his followers, the artist places him in the far back, behind the secondary figures such as servants. By creating this asymmetrical composition, the artist is actually using some Mannerism characteristics which introduced the Baroque style.