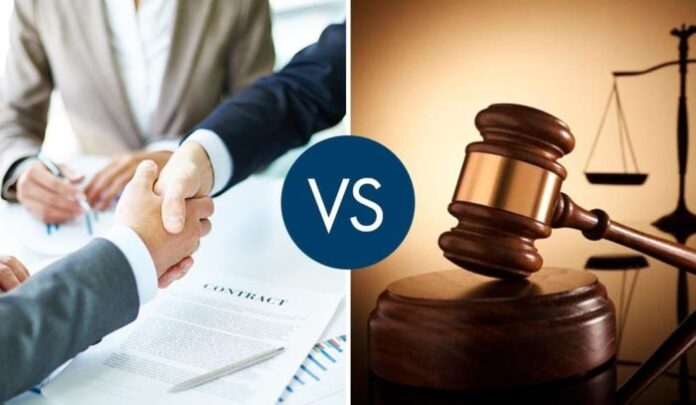 When a conflict arises between two or more parties, sometimes there’s no other way to find a solution for the problem than going to court. However, most courts and tribunals, both in the criminal, civil and commercial areas, are too saturated. This is why some new measures have been sought in recent years to reduce the workload of these organs, leaving more space and giving greater importance to figures such as mediation and arbitration. Both terms are often confused and, although it’s true that these two are both extrajudicial methods of dispute resolution, they’re not quite the same things.

To better see the difference between these notions it’s necessary to review the definition of the mediation first. The concept of mediation refers to a self-compositional system of conflict resolution in which an impartial third party intervenes. This can guide the debate, but in no case proposes solutions – it’s the parties who can decide whether or not they will reach an agreement and end the problem they’re facing. The definition of mediation itself implies that the role of the third party (or the mediator) is limited to being one of the facilitating means of communication. Its objective is for both sides to dialogue and find the middle between their own solutions.

On the scheduled date for the dialogue, the parties must specify the issues they want to discuss. Each one will have their turn to express their arguments, so everyone is equal. And this is the moment when the meaning of mediator gains strength, since he or she will have to ensure that the dialogue runs normally. Also, he or she needs to try to reduce the tension if it exists and build some trust. That’s the only way to get things right in such situations.

Once each of the sides has presented their arguments, there comes the time to start working on the search for solutions. The mediator will NEVER propose solutions, as we mentioned above –  but only try to allow the parties to reach an agreement themselves in order to avoid further problems between them. That’s why one should take care of the choice of a person who’ll have full control when it comes to such a situation. Of course, the best way is to hire a professional who specifically dedicates himself/herself to such problems, like, for example, O’Sullivan mediation, in case you’re an Australian resident.
Long story short, the mediator seeks to provide alternative ways of resolving quarrels – and it’s much faster and cheaper than going to court.

To better understand what arbitration is and what the difference between that and mediation is, we must go deeper into this matter. If we said that mediators try not to suggest their own ideas of resolutions, arbitrators do the total opposite.

This, in procedural law is a heterocompositive method of dispute resolution, which implies that the solution to the conflict is imposed from outside by an impartial third party that is freely designated by the parties. Its decision is reflected in an award that is final.  Regarding the arbitrator, it must be borne in mind that he or she must be a conflict resolution specialist (might even be a judge, as well), in which case we’re talking about judicial arbitration.

In order for the arbitration award to be issued, the process must go through several phases, which is why the procedure is discussed. First, a request must be submitted to the mediation, arbitration and conciliation institute of the municipality or the Autonomous Community. If the public body accepts it, it proceeds to designate an arbitration body and finally sets a date dedicated to hearing the statements of both parties. A quick trial scheme is followed to resolve the dispute as soon as possible.

Hence, when the day comes, the parties can make all the allegations they think are appropriate and even present some evidence. All information is analyzed by the arbitration board, which resolves through an award. Arbitration award definition refers to a resolution that has the same effect as a final judicial ruling. It cannot be appealed (except in those cases where there’s an appeal for the review of final sentences before the Supreme Court), but its execution can be requested. The award ends the procedure.

So, let’s make a summary. There are many things that differentiate the mediation of arbitration. In the case of the second one, the impartial third party resolves the issue through an arbitration award which is mandatory for the parties, whether or not they comply with the solution given by the expert. In case of voluntary non-compliance by any of the parties, the execution may be requested through judicial proceedings. Through arbitration, the most beneficial solution is sought and both parties have to comply with it, while if the mediator figure is used, it’s actually in charge of guiding the conversation without making any decision.

Both are forms of “alternative dispute resolution,” which means that they don’t require traditional judicial procedures. The main difference between the two is that mediation is an informal procedure facilitated by a mediator whose function is to help the parties negotiate and reach an agreement. Arbitration is a formal procedure decided by one or more arbitrators, whose function is to apply the law and a decision will be taken. Both mediators and arbitrators are neutral third parties appointed by the parties, as we had the opportunity to see in all previous lines of this article.

Having in mind that arbitrators apply the law and make decisions, it’s more like a traditional judicial action. However, it’s private, unlike the traditional court, which means that one hundred percent confidentiality is maintained. Many large corporations place mandatory arbitration clauses in contracts for this reason. The company knows, no matter how bad a legal claim becomes, the controversy will not be made public. Mediation, in general, isn’t binding on the parties, while the other process is. Sometimes, non-binding arbitrations are envisaged in contracts, but it’s usually the exception. One ends when the parties reach a settlement agreement – and the other ends when a decision has been rendered.

To conclude the story, the main difference between those two terms lies in the way of proposing the solution to the conflict and the strength of the agreement reached or the proposed solution imposed. A difference that’s also very important is that here the mediator collects the agreement reached by the parties in writing, but said agreement is not executive. You trust in the good faith of those involved and their willingness to end the conflict.
All these facts allow us to see that, although all these forms seek the common goal of ending a social quarrel without having to reach the judicial route, what changes is the role of the impartial third party involved. These explanations help us understand better and decide easier if we ever experience such a situation and that’s why everyone should be able to make their own choice.