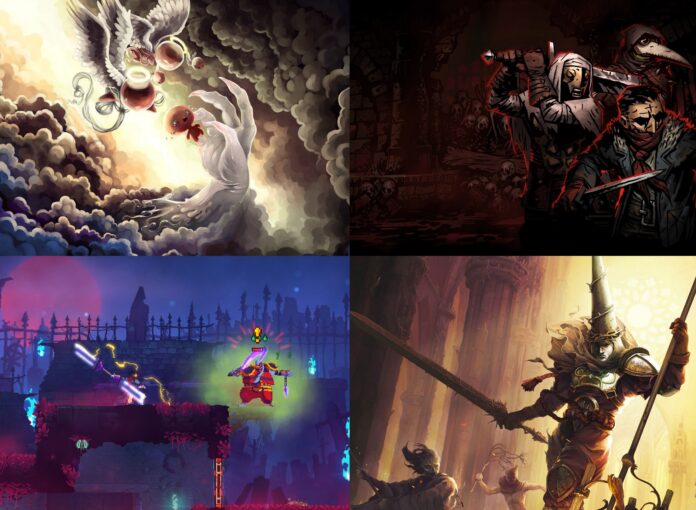 Many gamers enjoy relaxing or engaging gameplay to spend some time but a certain number of people like to be challenged. Dark Souls game inspired a plethora of titles that followed into a genre known today as hardcore games, and, needless to say, these titles are not for the faint of heart. However, those that don’t want to play explicitly gory triple-A games have many more options than one would think. Eneba store presents five indie games that offer some real challenge in terms of gameplay but the experience provided by each is truly rewarding.

The Game Kitchen’s and Team17’s joint effort resulted in a Souls-like Metroidvania game with an enthralling narrative set in a gothic world of fiction. This brutal action-platformer takes players on a mesmerizing journey across the pixelated world of dark aesthetics that play well together with the game’s premise and intended atmosphere of doom. If you think you’re going to embark on another average adventure, you’re utterly wrong because Blasphemous is the indie title that rivals the legendary Dark Souls franchise.

Your journey takes place in the fictional land of Cvstodia, ravaged by a plague ironically called ‘The Miracle’. This world is filled with besmirched religious references, bodies, and blood, creating a perfectly grotesque setting, and this world needs your capable skills to be saved. Take your trusty sword named ‘Mea Culpa’ and embark on a journey of your life in the hardcore universe of Blasphemous. Besides, it becomes almost impossible to beat in New game+, so if you’re up for a challenge, you’re getting it.

Another indie game to appear in the libraries of those who love challenges is Red Hook Studios’ pride – Darkest Dungeon. The Lovecraftian dark fantasy game of an aesthetically pleasing 2D gothic setting is a roguelike RPG that utilizes turn-based gameplay mechanics with some original quirks. You happen upon a band of the weirdest misfit heroes that you must train properly for the upcoming quests and trials. The sinister premise and atmosphere make for a perfect dungeon crawler game that masterfully combines several different gameplay features that together yield a fantastic result.

One of the most curious gameplay features is the stress meter. Not only do your team members face various kinds of freakish monsters but they also must combat rising levels of stress, anxiety, fear, irrationality, because if the meter goes too high, it will doom the battle. While in combat, hacking and slashing will not do, you must also think strategically to deal with hordes of enemies without suffering much damage, because after all, it is a hardcore title. It is quite ironic that stress is the most stressful part of Darkest Dungeons, isn’t it?

Moving away from the gothic, Motion Twin’s action-platformer Dead Cells is the apotheosis of stunning indie visuals and quirky story-telling. The roguelike Metroidvania title is everything a Souls-like can ever be: challenging, inspiring, absorbing, and rewarding. Absolutely gorgeous animations and visuals are reminiscent of the classical Castlevania games while the combat system has a plethora of options to offer, especially when you master the weapons in your arsenal: swords, throwing daggers, spears, bows, and even hammers.

The interconnected levels use procedural generation and progression unlocks more and more locations to traverse. In terms of the plot, Dead Cells use a minimalistic approach to story-telling. The bits of lore are only revealed in certain areas if triggered and the protagonist, known as The Prisoner, is relatively silent, so there is plenty of space left for interpretation. The main premise of the gameplay is the zone progression – discover more locations and secrets as you keep unlocking new zones. Dead Cells is one of the highly praised hardcore indie games for a reason, and the experience the game leaves players with is unequalled.

Edmund McMillen’s Binding of Isaac is the darkest game out of the five recommendations, dealing with a deranged mother that hears the voice of God telling her to sacrifice her son Isaac, and who, upon finding it out, escapes to the basement. This randomly generated action 2D roguelike title may look simple but don’t be mistaken for gameplay is brimming with challenges, and the permadeath feature is definitely not something to be taken lightly as all your progress will be lost the moment you die. In the basement, though, a myriad of dangers await that are going to demand the best of your skills and endurance.

The enemies Isaac, your playable character, is going to face are the monstrous manifestations of his sacrificed brothers and sisters that lurked in the dungeons under the house for years. The game has elements of FPS, so you can shoot your way through if you’re fast enough but you must also evade your enemies strategically. The game is brutal, it will chew you up and spit you out, and you will try again and again because every beat challenge bestows a grand sense of reward. The body horror displayed in the game is not something explicit due to 2D pixelated graphics but it adds extra depth to the grotesque and ghastly atmosphere of Binding of Isaac.

It would seem that most indie Souls-like games are rather dark-themed, so to end the list of recommendations on a good note, the last title we present is Hollow Knight. Coming from Team Cherry, this Metroidvania title takes players into the heart-stirring world of hand-drawn 2D art style, enriched by smooth animations as players fight their way through monstrous creatures and forge their very own adventure. Although the world of Hollow Knight is colourful and the protagonist adorable, the gameplay is nothing short of difficult, posing serious challenges even to the most skilled fans of hardcore games.

The action takes place in the ruins of a kingdom known by the name of Hallownest, filled with various levels and even more enemies to tackle. Naturally, the more you play, the stronger your character becomes and the more of the game’s map gets unlocked, each area distinct in its design both in terms of art and obstacles. In the long list of Metroidvania titles, Hollow Knight is one of the games that found its place at the very top because even several years after its release, players are enjoying this indie game thoroughly. Luckily, Hollow Knight has a high replay value, so you’re in for hours of unique gameplay process every time you decide to start over.