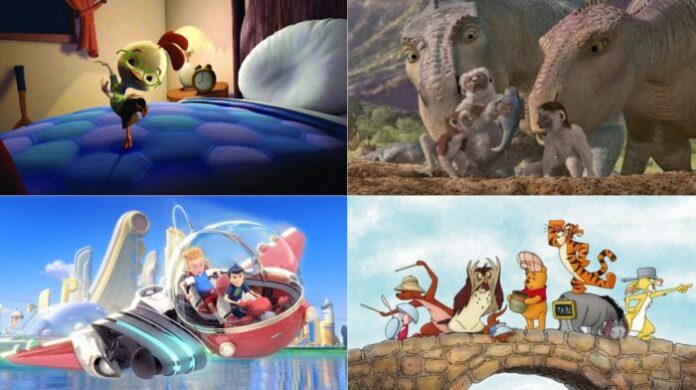 Remember when you went to the theatre to watch classic Disney films in the 2000s? How about the other Disney films which don’t seem to be as impressive? This list will feature some of the less successful and often unfairly-criticized theatrical and home video releases Disney has produced.

On a personal note, this movie looks like Cuba Gooding Jr.’s Snow Dogs remade into a drama film. It stars Paul Walker (Fast & Furious Franchise) and is about a pack of Siberian Huskies who have to brave the chilling Arctic to find their way back.

For a Disney movie that is critically and commercially well-received, few ever mention it these days. It’s a decent doggy film that will tug the strings of Husky owners.

This 2009 3D adaptation of a classic Christmas tale features Jim Carrey as the voice of the disgruntled Ebenezer Scrooge. As per the original, he meets the three important entities that will be the key to changing his miserable life.

Despite the commercial success, mixed reviews have often pointed out the disconnect between the story and Jim Carrey’s performance. Still, it’s a visual splendour and definitely an improvement over the similarly-animated The Polar Express.

Arguably the ancestor of Disney’s current trend of live-action remakes, this film is an adaptation of the 1961 classic. It follows the adventures of two “married” Dalmatians, Pongo and Perdy. They set out to rescue their pups who were kidnapped by Cruella de Vil.

While this spotted remake grossed $320 million against a budget of $75 million, critics and fans are less than enthusiastic. According to them, the only thing that makes it worthwhile was Glenn Close’s iconic take on Cruella de Vil.

For one, 101 Dalmatians 1996 is rather mild and straightforward. Still, its decent for what its worth and Glenn Close’s devilishly entertaining performance just adds to that charm.

The second 3D animated Disney film after Dinosaur, Chicken Little is about as wacky as the trailers suggest. It features a chicken who claims that the sky is falling.

This un-Disney-like style resulted in mixed to negative reviews and underperformance in the box office. While the film leaves a lot to be desired, Chicken Little embraces its silliness so much that one can’t help but giggle all the while.

The story of a boy who became a man by becoming a bear. The spirits punish a young Eskimo, turning him into a bear after he takes his revenge too far.

Brother Bear failed to catch the attention of Disney fans, unlike The Lion King and Tarzan that came before it. That’s not to say that the movie was all that bad. A decent film that touches on the symbol of love, perhaps it was just overshadowed by Disney’s best.

The story follows an Iguanodon named Aladar, who was raised by Monkeys. After a devastating meteor shower, they set on a journey with other Dinosaurs to find a safe haven from Velociraptors and two Carnotaurus.

This 2000 3D animated film about dinosaurs isn’t as underrated as others. Still, its included in this list because some fans associate it with the more popular Jurassic Park. Dinosaur mixes a decent if generic storyline with amazing visuals and thrills.

Sure, Sky High can be corny. But it’s the right kind of corny. It balances the usual Disney Teens comedy with a coming of age storyline. It sets a decent example of how to make a kid-friendly superhero movie.

This superhero film has all the right ingredients to keep it floating like its namesake university. The reason it’s on this list is because of potential comparisons with the franchise juggernaut, The Marvel Cinematic Universe (MCU).

The year 2011 marks a sad day for the fans of 2D animation. Winnie the Pooh garnered positive reviews, but its underwhelming box office performance ($50.1 million gross on a $30 million budget) means it is the last hand-drawn theatrical release for years to come.

This author cannot stress enough how wonderfully jolly this movie is. The audience probably looks down upon it for not being as “up to date” as the newer 3D animated films. In the words of Pooh, “Oh, bother!” indeed.

This movie serves as a straight-to-DVD sequel five years apart from The Emperor’s New Groove. Not long after the events of the first film, it focuses on the misadventures of lovable meat-head Kronk.

Compared to its more widely-praised predecessor, Kronk’s New Groove suffers the same negative feedback given to its non-theatrical Disney sequel brethren. Issues suggested include a formulaic storyline, unnecessary follow-up and supposed innuendos in a children’s film.

While the concerns about innuendo are justified, it doesn’t take anything away from the light-hearted hilarity this sequel provides. One might even dare say that Kronk’s sets itself apart from your usual 2000s Disney sequel formula. Fans of Patrick Warburton’s voice role as Kronk are in for a humorous romp that’s not afraid to go all PG for laughs.

On paper, this movie seems to be about a genius kid who goes to the future. A wacky, futuristic family with a pet T-Rex adopts that particular genius kid. That’s right, that family HAS A PET TYRANNOSAURUS REX.

Meet the Robinsons has more heart and story than the premise suggests. While the animation is a little dated, this movie still stands up there with the likes of Zootopia and Wreck-it Ralph. It’s even arguable that this film pushed Disney’s move to 3D animated films to the right path.

Just like Chicken Little, this 2007 3D animated film seems to be frowned upon during its release. While reviews are decent, the box office gross barely earned a little more than its budget.

Are you interested in checking these underrated films by Disney? Check out the couponlawn.com and get those sweet Disney Movie Anywhere coupons.